I would recommend going to Jeju in the summer or in September because the weather would not be too cold to experience all the beaches and outdoor activities that Jeju has to offer. Also, in September, the peak period has ended and you could most likely score a cheap ticket!

We took Asiana Airline from Seoul and arrived in Jeju at around 4.30 pm. The flight was really good and efficient. The boarding process took several minutes only and almost immediately after the plane door was closed, we were making our way to the runway already! It was the fastest flight process that I have ever went through!

After arriving and after checking in YEHA Guesthouse, we went to the 5 day folk market (제주시 민속 오일장).

This market is only open every 5 days (as such it is called the 5 day market). It is open every 2nd, 7th, 12th, 17th, 22nd and 27th of each month until 7pm. They sell many things a market would sell: vegetables, fruits, plants, clothing and street food! My friends and I were so excited over the street food because we were hungry after the flight.

To get to anywhere in Jeju city, I would recommend taking a taxi if you have more than 2 people in your travelling group as buses in Jeju are infrequent. The cost would also be similar to taking a bus for more than 2 people. Just let the driver know you are going to the O-il-jang and they will know where to go.

We then went to eat dinner at the famous Black Pork Street. We eventually chose the Hwaro Hyang Restaurant because of a blog post we read before we came. 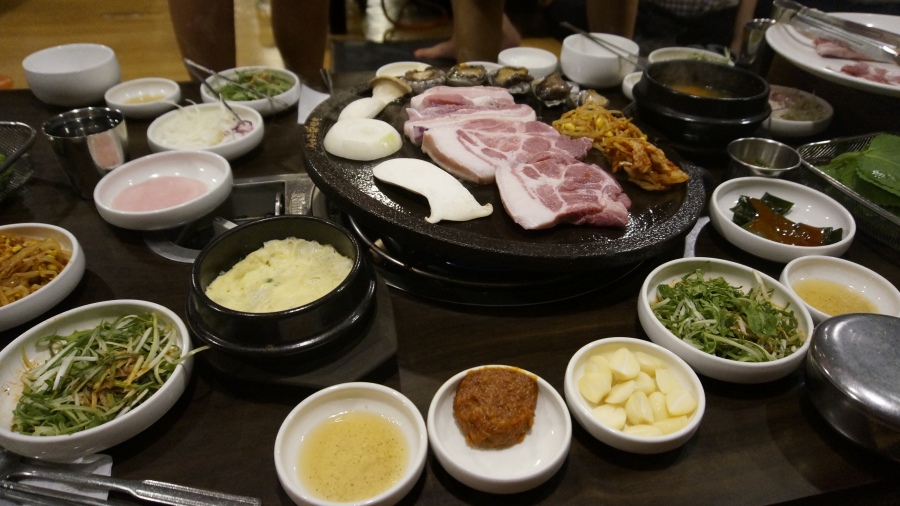 To be honest, I did not find it very spectacular. It sure was expensive though. We ended up spending more than 20,000 KRW (around S$25) per person for the dinner when we could have spent lesser in another BBQ place in Seoul. I would not recommend going to eat there. If you want to try eating black pork in Jeju, I suggest you go to a restaurant out of the Black Pork Street. Maybe ask your guesthouse reception on where to go.

On our second day, we joined YEHA’s East tour. As guests in the YEHA guesthouse, we got 10,000 KRW off the tour price (Normal price is 79,000 KRW). If you are not staying in YEHA, I would recommend booking online on their website to get a 3,000 KRW discount – not much but better than nothing. You will need to pay a deposit if you are booking online.

It was very hot when we reached Sunrise Peak. Too hot. I was also hoping we got to see the womens diver show but because Jeju was too hot at the time we were there, the divers cancelled the week of shows :(. If you are going in September, you could probably experience a better walk at Sunrise peak and be able to catch the diver show as the weather is not as hot as in August. The highlight of the tour for me was the Manjang Cave. I guess because it was so hot outside and in the cave, it was 16 degrees. Sunrise Peak was also very beautiful; it was very very hot though.

All in all, I would recommend the YEHA tour for solo travellers as the tour bus really provided the capability to see more of Jeju in one day. Taking a taxi would be expensive if you are going alone and taking public buses would not allow you to cover as many places in one day. I would also recommend to take the tour in September due to the weather. For group travellers, it may be cheaper to just rent a taxi for the full day (there is such a thing in Jeju, try Googling it!) and split the cost. You get to also adjust the itinerary and the time spent in each place that way. Just tell the driver the name of the places and he will know where to take you as these are all major tourist attractions in Jeju 🙂

Save cost when you travel to Korea

So glad to see you here!

Want to be the first one to receive the new stories?

Enter your email address below and we'll send you the goodies straight to your inbox.

Thank You For Subscribing

This means the world to us!

Spamming is not included! Pinky promise.