This is a continuation of the first part published here.

Since the weather was really nice on our second day in Busan, we did a lot of sightseeing. We went to three beaches and we took a Busan Bus tour (called Ibagu Bus Tour).

I would recommend visiting Busan in Summer as there are many beaches to go to there. IT would be too cold to visit them in other seasons! Even in summer, when the wind blew, it was quite cooling.

Since we stayed in Glory Condo in front of Haeundae Beach (해운대해수욕장), I went there for a walk in the morning before heading to the next beach. Haeundae Beach is really quiet in the morning so if you are staying in a hotel near the beach, try to walk in the morning to get some quiet time. I heard it gets really crowded in the afternoon as it is one of the most popular beaches amongst tourist in Busan. If you are not staying in Heaundae area, you can visit the beach by taking subway to Haeundae Station (Busan Subway Line 2) and exit at exit 5 and walk straight for about 500m.

The next beach we went to was Songjeong Beach (송정해수욕장). Songjeong beach is recommended for people who want to visit a not-so-touristy beach in Busan. This beach is more popular amongst local Koreans. People go to Songjeong Beach to surf, swim, play beach soccer and just laze around. I would recommend visiting this beach if you are with children as the waters are quite shallow.

To get to Songjeong Beach, you can go to Haeundae Beach Station exit 7 and take bus no. 63, 100, or 181 and get off at Songjeong Beach Bus Stop. It is only 3 bus stops away from the station.

We decided to go the last beach, Gwangalli Beach (광안리해수욕장), another well known beach amongst international tourist in Busan. The beach is well known for the view of Busan Gwangandaegyo Bridge (부산 광안대교) which lights up beautifully at night. Come at night and there will be people singing karaoke on the stage too. To get there, take a train from Seoul Station to Busan Station. From Busan Station, change to the subway at Busan Station (Busan Subway Line 1) and get off at Gwangan Station (Busan Subway Line 2) and exit 3 or 5. Walk for about 5-minutes to arrive at the beach.

This bus tour is one of the newest line in Busan, apparently. I was quite exciting for it initially… until I found out that everything would be in Korean. Although I did not understand most of the things that the guide was talking about, I still enjoyed the tour as we got to view Busan from various viewpoints. The theme of the tour is also about “Travelling back in time” and with the help from my friendly teammates, I got to learn some of the historical aspects of the sites we visited.

If you are able to speak Korean, then go and try to take this tour as it will give you a different perspective of Busan. The tickets cost us 16,000 KRW as we came in a group of 6. If you have less than 4 people in your group, it will cost you 20,000 KRW. Go here to book the tickets and be at Busan Station parking area before your departure time – look out for this bus: 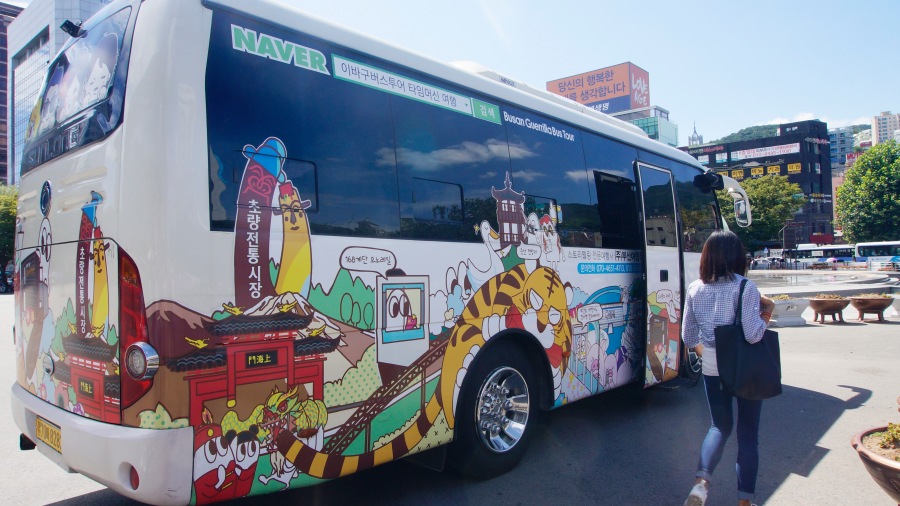 However, if you are NOT a Korean speaker, do not go on this bus tour but do try out the other city bus tours that Busan has to offer (for example, here) and have fun in Busan!

Check out the third part to this series here.

Save cost when you travel to Korea

So glad to see you here!

Want to be the first one to receive the new stories?

Enter your email address below and we'll send you the goodies straight to your inbox.

Thank You For Subscribing

This means the world to us!

Spamming is not included! Pinky promise.